The Dawson House stood as a unique architectural iteration of West Coast Modernism in West Vancouver and a wonderful example of Ron Thom’s artfulness and geometric prowess. Designed by Architect Ron Thom and completed in 1956-57, the Dawson House was originally built, owned, and occupied by Bob Dawson, a craftsman and friend of the Architect. The house is also commonly referred to as the Dawson/ Purdie House, for a subsequent owner.

Utilizing a design approach now synonymous with Ron Thom’s work, the Dawson House was one of the earliest built examples of the hexagonal planning grid, otherwise known as the “hex” or “30-60-90” grid. This unique design approach was pioneered by Frank Lloyd Wright and brilliantly harnessed by Ron Thom as an effective way to design homes on West Vancouver’s famously irregular topography. The resulting home fit organically into its surrounding environment and captured a dynamic flow that mimicked the movement of one’s own motion through space. Pre-dated only by the neighbouring 1955 Southworth House, also designed by Ron Thom and demolished in 2017, the Dawson House stood as the earliest and one of the last remaining examples of this planning strategy. To this end, it had been identified as a Secondary Building in the West Vancouver Survey of Significant Architecture, was placed on the West Vancouver Community Heritage Register in 2019, and was the recipient of a West Vancouver Community Heritage Award in 2009 following architecturally-sensitive renovations and additions by Architects Russell Hollingsworth and Barry Downs.

The Dawson House held a unique place in Canada’s West Coast Modern movement and we are sorry to have seen it demolished.

In 2018, the District of West Vancouver approved an application for subdivision of the Dawson House property. The subdivision, based on minimum lot sizes required in the zoning ordinances, resulted in the existing house straddling the new property line. Homes are generally not permitted to straddle a property line. Therefore, a Temporary Use Permit was also granted authorizing subdivision while providing a period of up to three years to allow the owner to explore heritage conservation options without demolishing the heritage house. The District reports that prior to subdivision there was no protection on the property and the owners could have simply applied for demolition. The following year, in 2019, West Vancouver approved the addition of the Dawson House to the Community Heritage Register. The Community Heritage Register does not offer legal heritage protection, but does incentivize a process for potential heritage protection in various ways, and places the requirement of needing an approved building permit prior to any issuance of a demolition permit. With the deadline on the Temporary Use Permit nearing expiration later in 2021, requiring demolition of the existing house or portion thereof to address the property line encroachment, the District of West Vancouver Council approved on February 8, 2021 a motion to remove the Dawson House from the Community Heritage Register. This decision essentially permits the owner to further apply for a demolition permit so that they can comply with the expiration requirements of the Temporary Use Permit.

VANCOUVER: The West Coast Modern League has been advised that the Dawson–Purdie House, originally designed by Ron Thom and completed in 1957, will be demolished this year. The two properties, on which the existing heritage house currently sits, have been sold separately, the terms of which require demolition of the house. The subdivision of the property in 2018, which was based on minimum lots sizes required in the zoning ordinances, resulted in the existing heritage house straddling the new property line between both parcels. While the house was recognized as a Secondary Building in the West Vancouver Survey of Significant Architecture, it was not until 2019 that the house was listed on the District of West Vancouver Community Heritage Register, a designation that was rescinded in February 2021 in order to comply with the terms of the Temporary Use Permit.

With the 2017 demolition of the neighbouring Southworth House, the Dawson–Purdie House is currently the earliest and one of the last remaining examples of Ron Thom’s use of the geometrical “30-60-90” grid, named for the hexagonal module employed in the planning of the house, as opposed to the usual orthogonal grid that constitutes most architecture. This unique approach was pioneered by Frank Lloyd Wright for the 1937 Hannah House in Stanford, California, and brilliantly harnessed by Ron Thom as an effective way to fit the house into its irregular topography, among other attributes. While not a replacement for its physical retention, we are fortunate in that the Dawson–Purdie House has been the subject of numerous publications over the years, and so there is some permanence to the history and lessons of this work of art.

VANCOUVER: The West Coast Modern League is concerned about the removal from the Community Heritage Register, and the imminent demolition, of the 1956 Dawson House designed by Architect Ron Thom, and originally built, owned, and occupied by Bob Dawson, a craftsman and friend of the Architect. We are hopeful that, in the spirit of past measures taken by Council and supported by the community, that the current or future owners continue to work with the District to explore heritage conservation options and move towards a permanent solution to safeguard one of West Vancouver’s last remaining architectural landmarks of this kind.

The Dawson House stands as a unique architectural iteration of West Coast Modernism in West Vancouver. The house is one of the earliest built examples of the hexagonal grid (as opposed to the conventional orthogonal grid of squares). Also called the “hex grid” or “30-60-90” grid, in reference to its acute and oblique angles, this unique design approach was pioneered by Frank Lloyd Wright and brilliantly harnessed by Ron Thom as an effective way to design homes on West Vancouver’s famously irregular topography. Because the house is not designed with conventional right angles, it fits organically into the surrounding nature and projects a dynamic flow of space inside. The adjacent 1955 Southworth House was Ron Thom’s first use of the hex-grid followed by the Dawson House as the second to be built this way.

With the demolition of the Southworth House in 2017, the Dawson House now stands as the earliest example of this unique design approach, and one of the last surviving structures of its kind. The 1957 Carmichael House and the 1965 Case House are the only other hex-grid houses still standing, to our knowledge. Russell Hollingsworth, renowned for his careful renovations and additions to other notable heritage houses in West Vancouver, completed an architecturally sensitive addition to the Dawson House in 2008.

Mr. Dawson, now retired and living in Lions Bay, still vividly remembers Ron Thom coming over to his empty lot to see what he might design for him there. I have been speaking to Mr. Dawson about this house on multiple occasions over the past year, since the Dawson House will be discussed in the upcoming biography of Ron Thom, to be published next year by Greystone Books, complete with an epilogue on the fate of this and other houses. Back in 1956, Mr. Dawson had already tried to draw up several house designs on his own. But the sloped, irregular lot he had purchased was difficult to build on in a way that would fit in to its natural setting. That’s when he called upon Ron Thom to look at the lot. “I remember Ron coming in the driveway,” recalled Mr. Dawson to me. “He looked at the solid granite rock, walked straight ahead, looked around at the hillside that was going down over several levels. And then he envisioned in his mind where everything could go: the front door, the windows, everything. He said, ‘Yes I’ll work with you, but first we need a topographical map of the rock.’” John Southworth did the survey for them, and Ron Thom employed the “30-60-90”-degree grid to create a strikingly beautiful house whose angles fit into the irregular topography of the land.

Here, for further context, is an excerpt from my manuscript-in-progress:

….As Bob finished constructing his house on Rose Crescent, that street transformed into a three-dimensional advertisement for Ron Thom’s inventive brand of architecture. As well, it provided Ron himself with a template to continue exploring ways to defy the conventional right-angle grid altogether. Most buildings in the world are designed and built on a standard orthogonal grid, creating 90-degree corners and a predictable—if boring—layout. The hexagonal grid changes the very nature of the spatial experience. The diagonal trajectory makes for a dynamic circulation pattern, as though the walls themselves are simultaneously moving in tandem with your own motion through a room. The angled walls created beauty, but this marked a different and more profound concept of ornamentation: not as a surface treatment or add-on but an inherently beautiful phenomenon that is intrinsic to the structure. That was exactly what Ron aimed for. It was an expensive way to build, but he knew he’d come back to it for bigger things.

The “bigger things” alluded to in the closing line of this passage include Lester B. Pearson College of the Pacific, the landmark international school designed in 1974 by Ron Thom with a 30-60-90 grid, for which the Bob Dawson house served as an early prototype.

We are appreciative of the efforts taken thus far by the District and owners to retain this architecturally significant house. For the collective good of the community and its future generations, we implore Council to reject the removal of this landmark from the Community Heritage Register and continue to work with the owners and with heritage advocates to find a smart, collaborative solution to protect it.

Email your support for the house to West Vancouver Mayor + Council: mayorandcouncil@westvancouver.ca

June 8, 2021: The Dawson–Purdie House has been demolished.

February 9, 2021: At its February 8th Regular Council meeting, District of West Vancouver Council approved a motion to strike the Dawson House from the Community Heritage Register paving the way for the owner to apply for a demolition permit in order to adhere to the terms of the Temporary Use Permit.

February 8, 2021: The District of West Vancouver Council is scheduled to consider a motion to strike the Dawson House from the Community Heritage Register to allow the property owner to adhere to the terms of the Temporary Use Permit (TUP) for the site to demolish the existing house prior to expiry of the permit.

September 24, 2018: The District of West Vancouver Director of Planning and Development Services has approved a Temporary Use Permit to authorize the subdivision of the property into two lots. The permit will allow the existing dwelling and garage to remain for a period up to three years to allow the owner to explore heritage conservation options without demolishing the heritage house, designed by Ron Thom.

June 21, 2018: The District of West Vancouver has received an application for a Temporary Use Permit to allow for subdivision of the property into two lots. 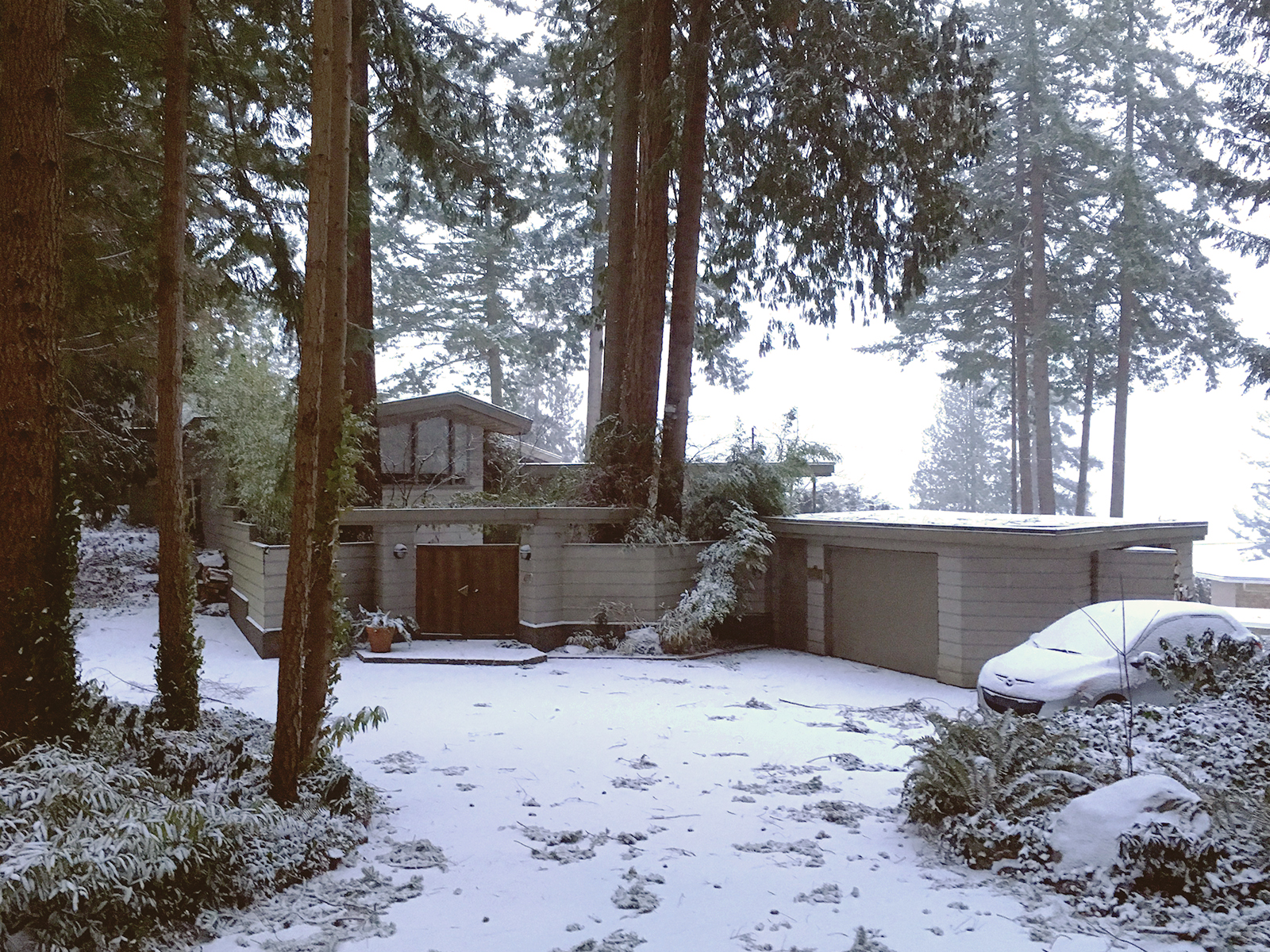 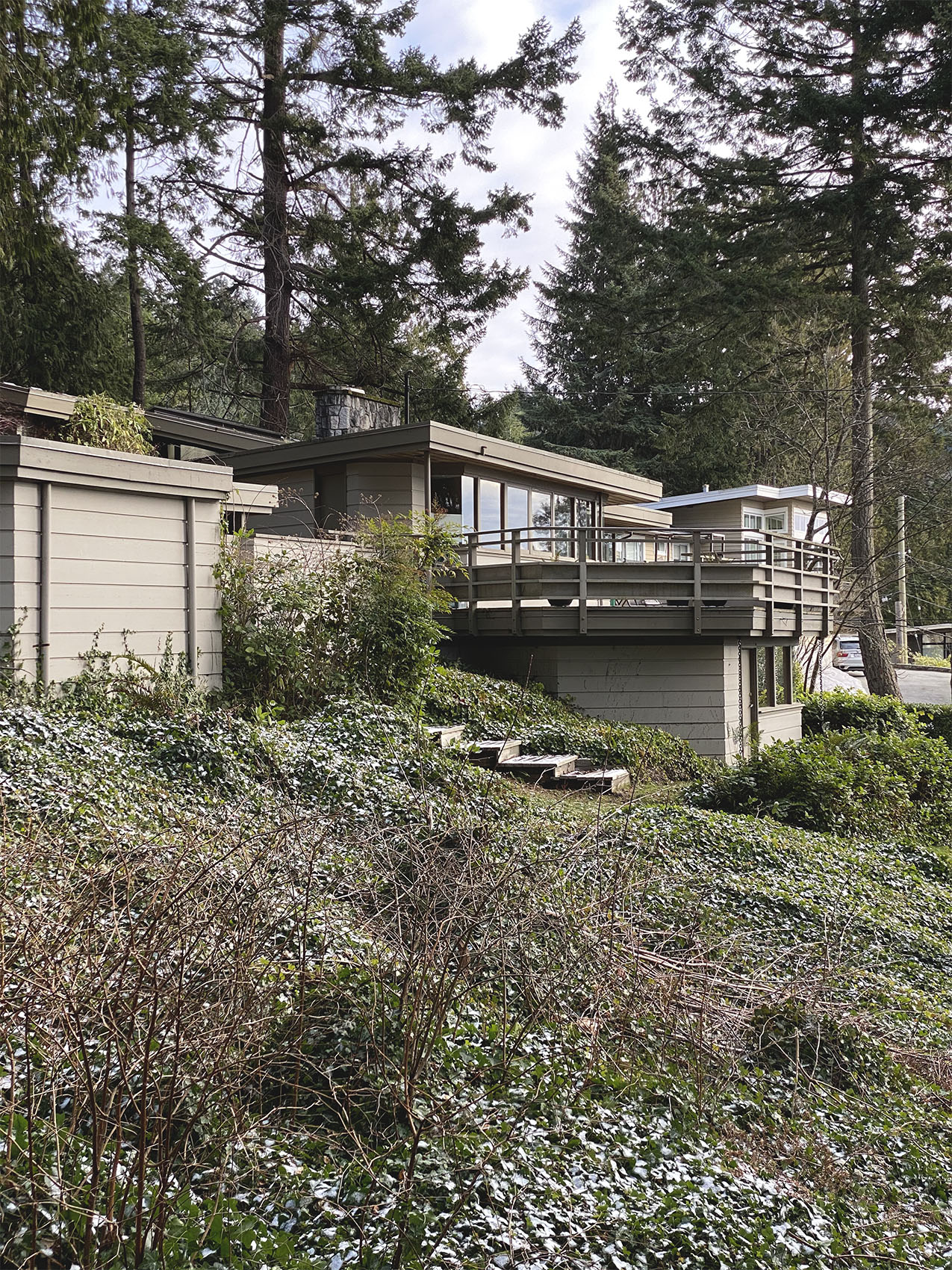 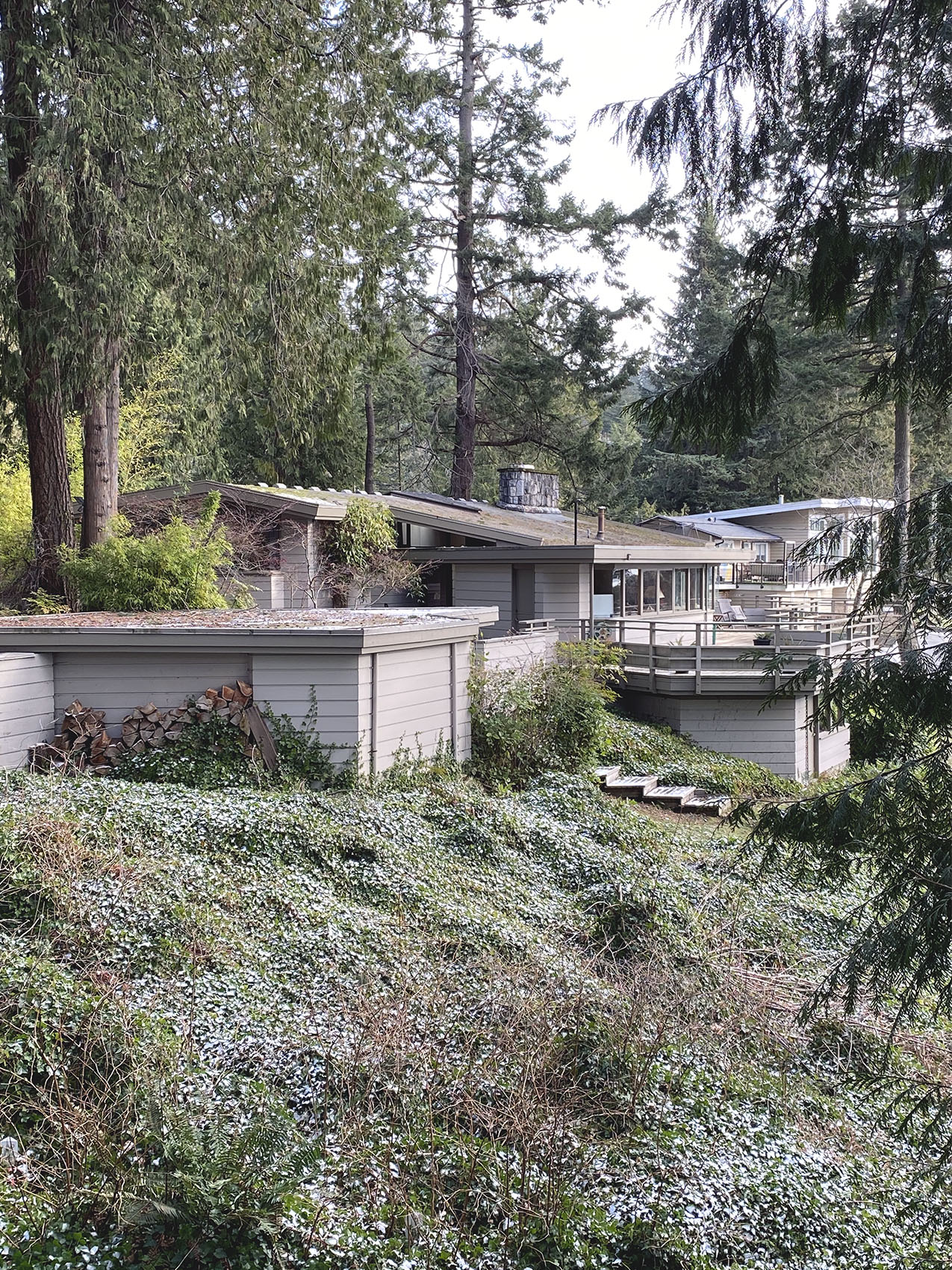 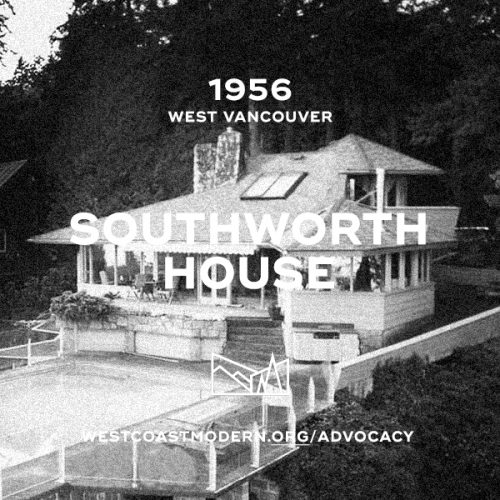 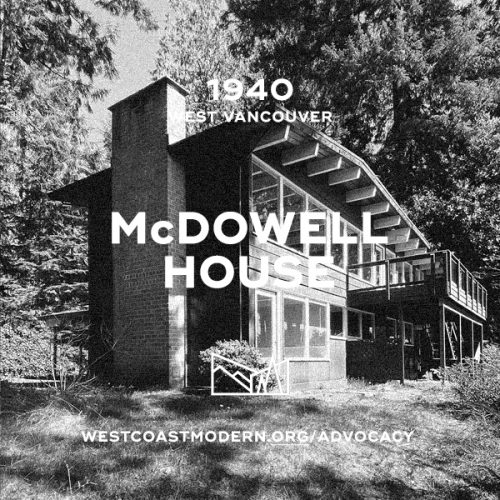 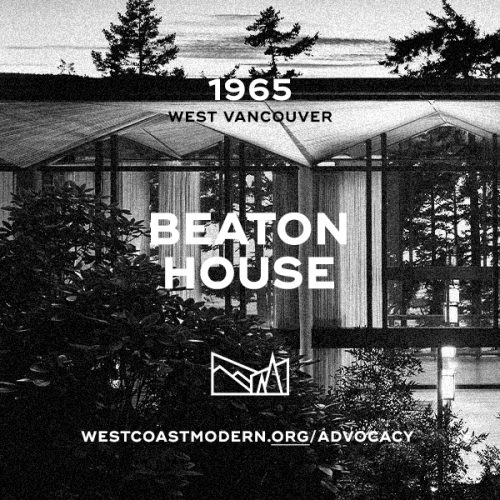